Antoni Gaudí i Cornet (25 June 1852–10 June 1926) was a Spanish Catalan architect and figurehead of Catalan Modernism. Gaudí’s works reflect his highly individual and distinctive style and are largely concentrated in the Catalan capital of Barcelona, notably his magnum opus, the Sagrada Família.

Much of Gaudí’s work was marked by his big passions in life: architecture, nature, religion. Gaudí studied every detail of his creations, integrating into his architecture a series of crafts in which he was skilled: ceramics, stained glass, wrought ironwork forging and carpentry. He introduced new techniques in the treatment of materials, such as trencadís, made of waste ceramic pieces. 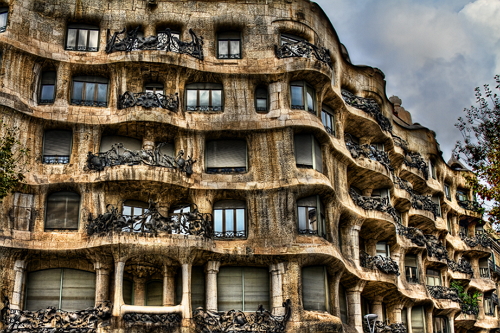 After a few years under the influence of neo-Gothic art and Oriental techniques, Gaudí became part of the Catalan Modernista movement which was reaching its peak in the late 19th and early 20th centuries. His work transcended mainstream Modernisme, culminating in an organic style inspired by nature. Gaudí rarely drew detailed plans of his works, instead preferring to create them as three-dimensional scale models and molding the details as he was conceiving them.

Gaudí’s work enjoys widespread international appeal and many studies are devoted to understanding his architecture. Today, his work finds admirers among architects and the general public alike. His masterpiece, the still-uncompleted Sagrada Família, is one of the most visited monuments in Spain. Between 1984 and 2005, seven of his works were declared World Heritage Sites by UNESCO. Gaudí’s Roman Catholic faith intensified during his life and religious images permeate his work. This earned him the nickname “God’s Architect” and led to calls for his beatification.

To work with, he was a nightmare. He was short tempered. He was arrogant. He treated workers with considerable contempt. He did all the things that demanding brilliant maestros are in the bad habit of doing.
~Robert Hughes

Gaudí’s professional life was distinctive in that he never ceased to investigate mechanical building structures. Early on, Gaudí was inspired by oriental arts (India, Persia, Japan) through the study of the historicist architectural theoreticians, such as Walter Pater, John Ruskin and William Morris. The influence of the Oriental movement can be seen in works like the Capricho, the Güell Palace, the Güell Pavilions and the Casa Vicens. Later on, he adhered to the neo-Gothic movement that was in fashion at the time, following the ideas of the French architect Viollet-le-Duc. This influence is reflected in the Colegi de les Teresianes, the bishop’s palace in Astorga, the Casa Botines and the Bellesguard house as well as in the crypt and the apse of the Sagrada Família. Eventually, Gaudí embarked on a more personal phase, with the organic style inspired by nature in which he would build his major works. 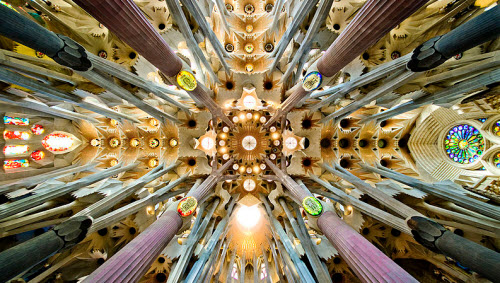 The nave in the Sagrada Familia with a hyperboloid vault. Inspiration from nature is taken froma tree, as the pillar and branches symbolise trees rising up to the roof.